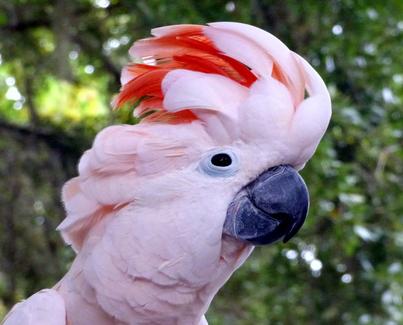 Teddy is a Moluccan Cockatoo or a Salmon-Crested Cockatoo. He is middle age but we do not know his exact age.  Moluccans can live to be 70-100 years old.  Moluccan Cockatoos are considered the loudest of all the parrots.  Teddy is usually the favorite among visitors because of his friendly disposition.  Anyone can touch Teddy and he begs to be stroked.  He is famous for saying: Tickle Tickle when he wants to be touched.

Plato is a Congo African Grey and she is middle or older age.  Most African Grey’s have a life expectancy of 50 to 70 years.  African Greys are considered to be one of the most popular parrots, and one of the best speakers. They can mimic human speech far better and more often than other parrots.  Plato is always fun to watch and hear.  She can meow like a cat and can make various other interesting sounds.  Plato found a home with Dr. Tappan and keeps Charlie company.

Yogi is a Blue-Fronted Amazon in her late 30s.  When Yogi first arrived, she was frightened and wild.  Today, she is tame and talks and will allow most people to hold her.   Boo Boo is an Orange-winged Amazon male and, like Yogi, is in his late 30s.  Yogi and Boo Boo share a cage and are currently displaying mating behavior.  (By the way, it is nearly impossible to tell a bird’s gender unless the bird lays an egg.)  Thanks to the support of our donors, all of our nonlaying birds have been DNA tested.

Julia was born in 1997.  Julia startles easily because she is partially blind. Her vision is cloudy and she does not see colors.  Julie has found a permanent home with one of our volunteers and is very happy there.

Working with a blind bird is particularly difficult because sight is an essential protective feature for birds.  Parrot eyes are special, arguably better than humans.  Parrots have ultraviolet sensitive sight. This is especially useful for courtship, where many birds feathers reflect UV light, making their plumage seem even more appealing.

Darwin is a Blue-Front Amazon female who could be as old as 75.  She is our oldest bird.  Darwin found a permanent home with one of our volunteers and is doing fantastic and is gaining weight!

As healthy as we try to keep the birds, there are a few problems.  She was underweight and her pectoralis muscles are not as strong as we would like them to be.  To fatten her up, her new parents are giving her almonds and other nuts.  Darwin likes to sing and walk around her new neighborhood.

Meet Apollo, a beautiful and valued member of our avian family.  He was brought to us by his loving neighbors and our volunteers.  One neighbor, in particular, Bonnie, showed great interest in Apollo and spearheaded the relocation.  Apollo was born on March 4, 1997.  He weighs 810 grams and is semi-tame, but is very sweet.  He loves music, red peppers, and prefers men.  However, he loves to cuddle with Trudy.  He is 105 grams heavier than Teddy... he is a big bird!

Charlie is an older male African Grey, thought to be born around 1948.  In his earlier years, he had plastic surgery for a fungus within his nasal turbinates, likely caused by a vitamin deficiency.  The fungus returned and is treated daily.  This is common with imported birds.  What are turbinates you might ask?  In humans and birds, the sidewall of each nasal passage is lined by three ridges of tissue, and each of these is called a turbinate.

Charlie is lovable and mellow.  He eats two cups of fruit and vegetables each day along with his regular meals.  He loves Avi-Cakes.  He is vocal and sits right next to our other female African Grey in Dr. Tappan's sunroom.

Sweetie was surrendered to the sanctuary in June 2018.  She is an adolescent African Grey, hand raised. Sweetie is very smart and is a great talker and imitator of sounds.  She loves cardboard boxes, music, and toys.
Sweetie enjoys sugar snap peas, broccoli, almonds, carrots, and corn, among other foods. We are working on her issue with feather picking and progress is being made.

Perito is a female Amazon parrot donated by a man who had her for many years.  Prior to that, she lived on a ship.  Perito loves everyone and will go to most people.  She enjoys grapes and sweet cornbread among other foods.  She came to the sanctuary in June 2018 and is very well behaved. Perito has been adopted and loves her home.

Fred is a male Amazon with beautiful markings and a little girl's voice.
He greets us by saying "Hello" every morning.  He has a fabulous appetite and eats all of his fruits and vegetables every day.  Both of Fred's owners passed away recently.  He came to us in May 2018.  Fred found a home and is doing well.

Ponch is a middle-aged African Grey who came from an owner who could no longer care for him.  The former owner had taken good care of Ponch for 28 years and brought him a birthday cake on his 28th birthday at the sanctuary on January 29, 2019.  Ponch is very photogenic and his photos have won prizes.

Click on any of the photos below to view them. 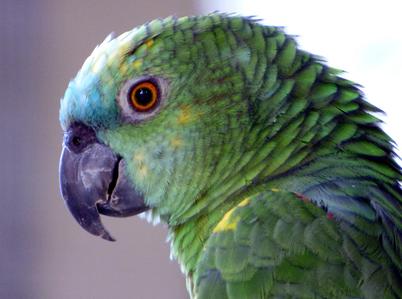 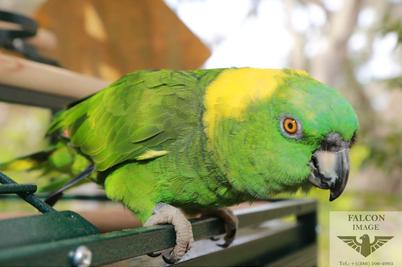 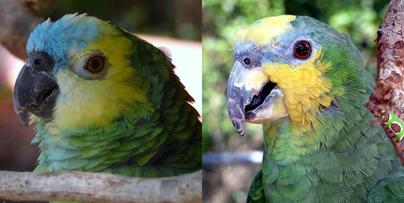 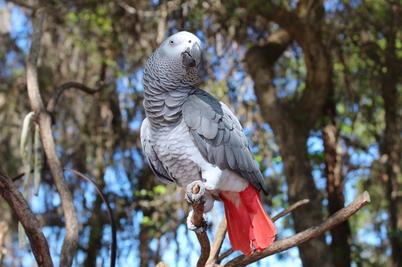 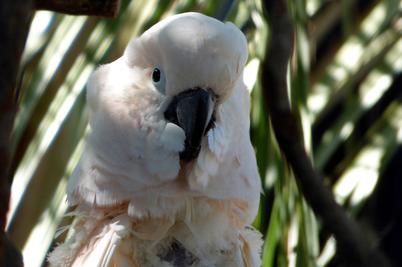 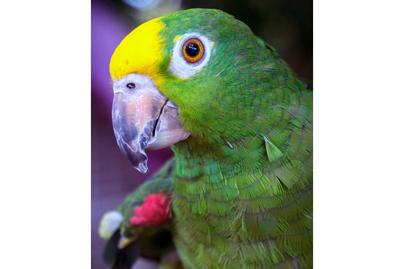 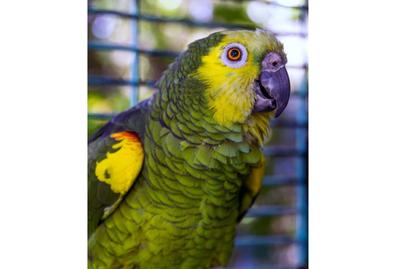 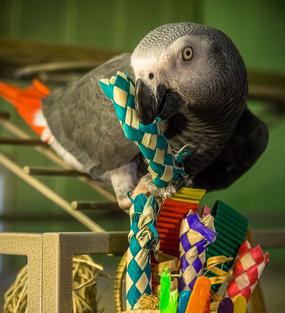 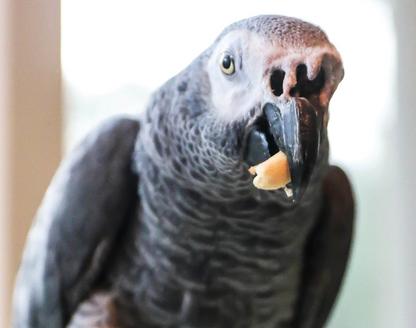 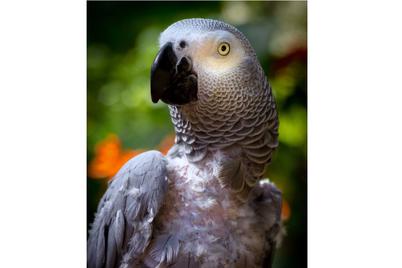 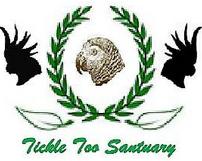